A JUMPSTART SATURDAY AT BANGALORE!

(This is a post that I penned for the Headstart Network, a pan India entrepreneurship network for which I've recently started writing/volunteering. To know more about Headstart, click here. Hope to see more such posts in the future!)

It wasn't yet another lazy Saturday morning, at least for a bunch of us. It was a jumpstart Saturday. The reason? Startup Saturday was back in town! Thanks to Yahoo, we had a wonderful space for the event this time too - The Yahoo office at Bagmane Tech Park,  CV Raman Nagar. The audience turnout reflected this edition's theme - 'Building your Startup', with more than half of them having just started or aspiring to start their own business ventures soon, which in turn meant that quite a few were attending the event for the first time. Though the turnout was lesser than usual, it was an eclectic mix, which ensured a great session. 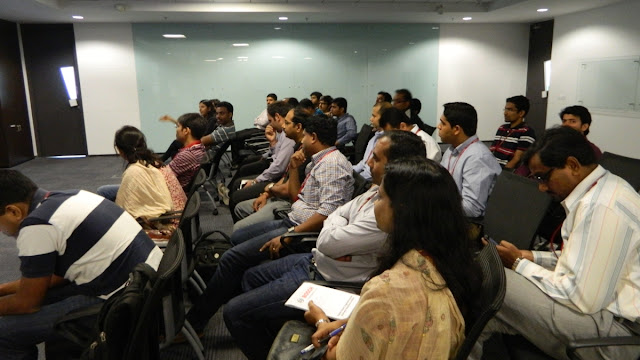 The event commenced with Prashant of Headstart giving the audience an introduction to Startup Saturday and to Nasscom 10000 Startups.  This was followed by the first scheduled talk of the day by Mr. Chetan Kulkarni, Founder and CEO at Vizury.  True to the theme, Mr. Chetan spoke about how Vizury was built, tracing along the timeline, the milestones of the company with respect to funding, customer acquisition and expansion.  He also spoke about the background of the co-founders and the common thread that brought them together. The talk was peppered with some interesting anecdotes, the most notable one being the incident that marked the beginning of their China operations. The talk ended with an interesting Q& A with Mr. Chetan and not surprisingly, the questions revolved around starting-up itself. 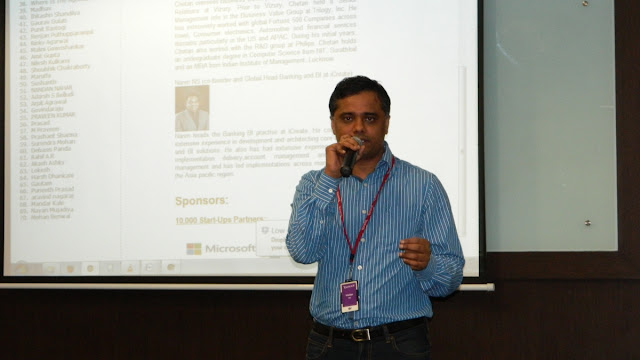 Before the second speaker of the day was ushered in, Prashant brought in a whiff of social entrepreneurship to the event, by familiarizing the audience to ‘Jagriti Yatra’ -  the incredible train journey for entrepreneurs and aspiring entrepreneurs organized by Jagriti Sewa Sansthan. The fact that we had two ‘Yatris’ amongst us added to the credibility of the intro.

Next on stage was Ranjan Kumar of Oye Party.com. This session was a product demo ; Ranjan walked us through the various features and differentiating aspects of OyeParty. He also shared the current setup and the future direction for OyeParty. We must say he did a good job convincing the audience and taking on their bashing, as majority opined at the end of the demo that the venture would be a hit! Here’s Headstart wishing you goodluck with OyeParty, Ranjan!

The second talk of the day was delivered by Mr. Naren NS, Co-founder and Global Head for Banking and BI solutions at Icreate.in.  He took the audience on a time-travel, allowing them to have a peek into his career trajectory. Tracing back right from his college days, working on a core banking solution as a techie, starting up, getting that elusive first customer etc. to growing and expanding his business overseas, he covered it all. He also briefly described the company’s transition from being a services provider to providing product based solutions and the challenges associated with the same. Overall, it was a well-received talk with a lot of interesting questions thrown in by the inquisitive audience. 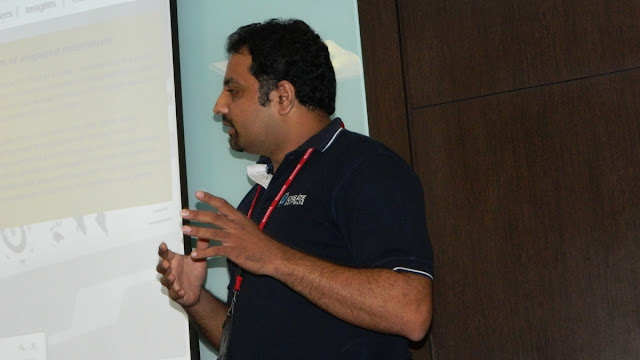 The final offering for the day was a ‘Spark the rise’ pitch by Ihitashri Shandilya of Mithilasmita. A nominee of Mahindra’s ‘Spark the rise’ campaign, Ihitashri emphasized the importance of supporting our local art and culture. She spoke in brief about her replicable business model for promoting art, with the model currently being applied to something that she grew up with and is very close to her heart – Madhubani paintings from the Indian heartland. 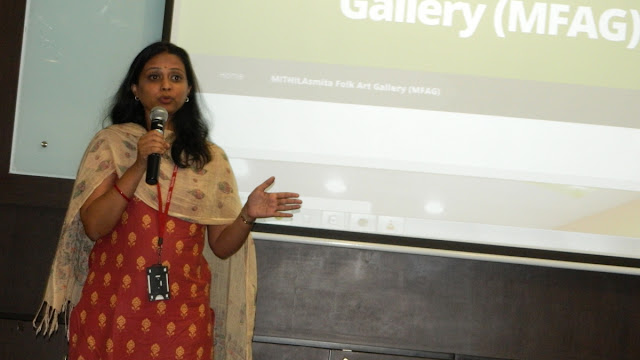 With that truly inspirational pitch and the networking time that ensued, that day’s event drew to a close. However, for each one of us there, it was just the beginning, for the spark to be rekindled, the beliefs to be reinforced, the ideas to be evaluated, yet another time.
Posted by Malini at 5:17 AM